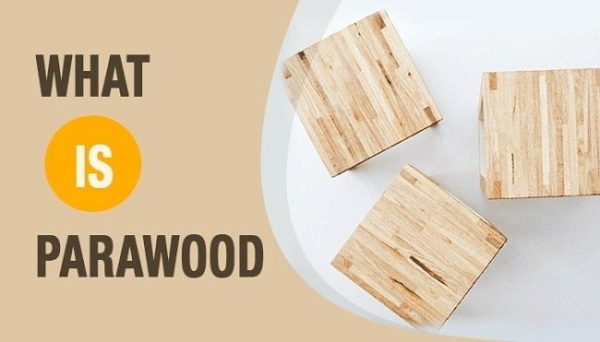 Parawood is a hardwood tree that originated from South America, Brazil, and is believed to have been introduced in Asia in the year 1877. The hardwood tree is largely grown in Malaysian plantations.

The parawood tree produces latex which has quite a variety of uses such making paints and thus only harvested in cases when the latex has dried up. At this point its considered to have ended its useful life cycle.

The hardwood tree is often white and maple like in color but it has some color changes during its growth. It develops a slightly light brown color which others consider blonde with some brown streaks.The color is however noticed to darken as the tree ages.

Its light color has widely favored it in the furniture industry as it allows easy staining thus it can be custom colored into different desirable colors depending with ones taste and color preference.

Parawood is considered to have quite some odor during its working i.e its general smell and probably its smell during production.The smell disappears as it dries up thus the wood as furniture does not have on odor.

The wood is coarse in texture and is observed to have pores that are open and large with its grains considered straight. Considering its weight, it has a basic specific gravity of about 0.51.

It is also observed to have very little shrinkage and this gives it a plus in the furniture industry as this characteristic makes it stable for furniture use.

The commonly used hardwood tree is often considered a low end furniture due to its relatively low prices. The tree is widely planted in Malaysia and thus the great supply makes it quite inexpensive.

However, Its not transported as the tree itself but rather as converted furniture and in some cases as household items. Its low prices can be attributed to the fact that it is sold as an unfinished product.

One of the main disliked characteristic of the parawood is that it very perishable and has a very low natural resistance to rot and decay. The wood has a high start content which attracts insects making it very susceptible to insect attacks and probably fungal staining. Its therefore not recommended for outdoor activities since rain can leach its protective surface.

It however can undergo a chemical treatment process making it available for furniture use without the worry of insect infestation and fungi staining.

Parawood has never been considered to be facing any threat of extinction as any tree harvested is replaced and in addition extinction would no be quite possible since its grown vastly in plantations.The tree is only harvested at the time which its latex has dried up and thus considered to have finished its active cycle.

The rubberwood is considered to have quite many uses after harvesting as it can be used for furniture, used in kitchen wooden ware, cabinetry and can also be used in the pulp and paper industry.

The parawood tree is very important in the furniture industry and is considered to be environmentally friendly. It has quite a lot of advantages apart from its low pricing such as; its very easy to deal with in nailing, gluing, sawing.

How to Remove Laminate from Wood

How to Remove Wood Stains off Hands

How Long Does Wood Filler Take To Dry?