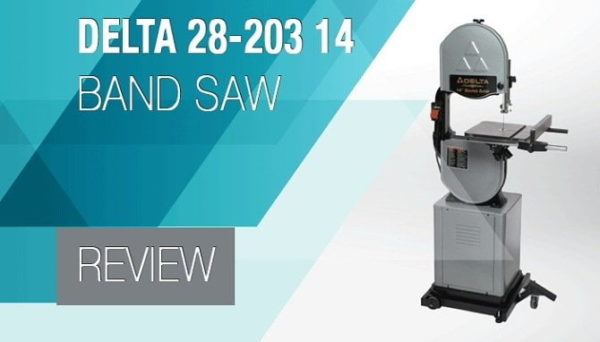 The band saw is an indispensable power tool in the workshop, and this is true now, as it was many years ago. One such example of the band saw that woodworkers turned to get their cutting job done was the Delta 28-203. Back in the day, the Delta 28-203 was pretty much the standard of band saws. It was so for many appealing reasons.

The Delta 28-203 is a big band saw. It comes in two very heavy boxes and it is a two-man mission to mount it. Since it is heavy, this generally equates to good quality as it has a cast-iron base to limit and absorb vibrations.

Plastic – the adjustment knobs are all made from plastic. A bad move from Delta because they do not compensate the metal finish of other moving parts well. Otherwise, they are easy to use and adjust everything from the band saw skid to the wheel planes.

The Delta 28-203 band saw fits industry standard 14-3/4 inches blades. It is easy to replace or maintain. It is not key-less, and requires a provided Allen key. The bearings are easily adjusted with this Allen key and will only take you a few minutes to mount and dismount the blades.

The band saw while in operation is loud. Not deadening loud, but it’s not silent either. On-par with even modern day band saws operational loudness.

This model makes provisions for a dust collection system. However, it lacks standard holes to fit hose ducts of varying sizes as the default is only for 4-inch dust collectors. You will need to perform a custom job for the Delta 28-203 to accommodate systems of other sizes.

Out of the box, it makes provisions for a riser card for up to 12-inch. Very handy!

All in all, for a band saw that is that old, the Delta 28-203 has a lot of features that simply worked. This is not a model that came with 101 features or gimmicks. This model has since gone through various iterations and its successors kept on getting better and better. The same can be said for the whole band saw industry in general. Today, you can grab a much superior band saw for the fraction of the asking price of the Delta 28-203.

Another opinion about Delta 28-203 with the comparison on this video.

Currently Delta 28-203 is not selling on the market. If you are looking for a best bandsaw. Click link below to find best bandsaw on Amazon