2 Cycle Vs. 4 Cycle Gas Trimmers: Which is Better for You?

Gas trimmers produce more power than electric ones and this allows you to work more efficiently. There are 2 types of gas trimmer engines: 2-cycle and 4-cycle engines.

These two engines have their different characteristics, advantages, and disadvantages. They are both gas-powered, but the way they turn gas into power is what makes them different.

Following is a side by side review of 2-cycle and 4-cycle trimmers. By going through it, you'll pick up enough information to help you decide between the two.

2-Cycle vs. 4-Cycle Gas Trimmers - How They Work

Cycles or strokes, refer here to each movement of the piston inside the engine's cylinder, from one end of it to the other. The number of cycles that an engine has to make before producing power is what gives it its name.

Depending on the engine's design, each piston cycle could be upwards, downwards, to the right, or to the left. This doesn't matter much between these 2 engine types. What matters most is the number of strokes before power gets produced.

Following is a closer look at each of these engine designs. 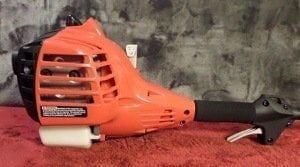 A 2-cycle trimmer is a gas-powered trimmer which is fitted with an engine that produces mechanical power with each second stroke of its piston.

Assuming that the engine is held in an upright position with the spark plug on top, the first piston stroke will be downwards, forced by the sparking of the plug, which ignites the compressed mixture of air and gas in the upper cylinder.

As the piston moves a certain length downwards, it goes below the engine's exhaust hole, which is not too far away from the cylinder's top, and this allows some of the expanding gases to escape.

Moving further down, the piston goes below the cylinder's air intake hole, which is usually lower than the exhaust hole and on the opposite side of the cylinder. This allows a fresh mix of air and gas to enter the upper combustion chamber.

This fresh mix of gas and air is normally stored in the lower cylinder, so as the piston gets forced down by the combustion, it also pushes down on the gas mix and forces more of it into the upper chamber.

For this system to work properly, a valve closes the air intake from the carburetor when the piston is coming down and opens it to allow a fresh mix into the lower cylinder, when the piston moves back up.

Once the piston has reached its lowest point inside the cylinder, the rotating action of the crankshaft forces it back up, towards the upper part of the cylinder and the combustion chamber. This is the beginning of its second stroke.

As it moves upwards, it closes off both the intake and exhaust holes, trapping an amount of air and gas mix in the upper cylinder.

When the piston reaches the top, the gas mix becomes very compressed, and then, just before the crankshaft turns the piston back downwards, the plug sparks, creating a rapid combustion and forcing the piston down with power again.

Since the lower part of the cylinder is always filled with the air and gas mix, this type of engine requires that a certain amount of oil gets mixed into its gas, to lubricate the cylinder, the piston, the crankshaft, and any other moving parts. 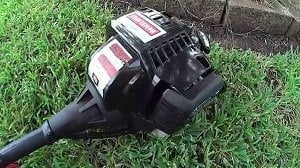 With 4-cycle trimmers, the engine produces one power stroke every 4 cycles. This means that given the same engine size and gas, a 2-stroke engine will produce more power than a 4-stroke engine. Still, 4-cycle engines have their advantages.

Assuming an upright engine again, and with the plug on top, the first stroke of the piston will be downwards. There is nothing in the upper cylinder, but as the piston goes downwards, the engine's inlet valve opens and a mix of gas and air gets forced into the cylinder.

Once the piston reaches its lowest point inside the cylinder, the inlet valve closes and the crankshaft's action turns the piston into an up move. This is its second cycle.

As the piston moves upwards, all valves are closed, and so the gas and air mix get compressed. When the piston reaches the top, a spark plug ignites the mix and creates a power stroke downwards, which is stroke number three.

As soon as the piston reaches its lowest point inside the cylinder again, it gets pushed back up by the crankshaft's action and this is cycle number 4.

During cycle 4, the exhaust valve opens to allow exhaust gases to escape. When this piston reaches the top of the cylinder again, it begins a new cycle.

The valves' opening and closing are controlled by gears which get powered by the crankshaft. A 4-stroke engine usually has its lubrication oil separate from the gas. This allows it to burn cleaner and more efficiently than 2-stroke engines.

This engine's division of gas intake and exhaust into different strokes also allows it to manage fuel better than 2-stroke engines.

Given the differences in the design of these engine types, each one has certain features which are either better or worse than the other engine. Some of these features are as follows:

Power. Two-cycle engines produce more power on average than 4-cycle engines. The reason is also easy to understand. Given the same engine size and specifications, the 2-cycle will produce twice as much power-strokes as a 4-cycle engine, thereby delivering more grass trimming power.

Fuel Economy. This is where 4-stroke engines shine and the reason they outperform 2-stroke trimmers in efficiency and other kinds of tests. Given that the engine uses different cycles to deliver the gas mix into the cylinder and to remove the spent exhaust gases, 4-cycle engines burn fuel cleaner than any 2-cycle engine ever can.

The problem with the 2-cycle system is that exhaust gases are never completely removed from the cylinder before a fresh mix of gas and air gets introduced. In fact, part of the exhaust gases gets compressed again for re-ignition, while part of the fresh gas mix gets sent out through the exhaust without performing any work at all.

Noise. Two-cycle engined gas trimmers are typically much louder than their 4-cycle counterparts and the reason is simple. Four-cycle engines have a dedicated third cycle for ignition and combustion, and the cylinder is completely sealed because both its inlet and exhaust valves are closed at this time. When it enters its fourth and exhaust cycle with its exhaust valve open, most of the gas mix has usually combusted. This greatly reduces the noise that filters outside. And although this setup does make some noise, it's not as loud as the noise from a 2-cycle engine.

With 2-cycle engines, each down stroke includes a combustion, and as the piston moves downwards, the exhaust hole opens. This connects the fast combustion of gas and air, which is practically a little explosion, with the outside world. The size of the engine's cylinder, plus the amount of gas in the mix, usually determine the loudness of the bang.

Weight. Two-cycle engines are usually more lightweight than their 4-cycle cousins. This makes them the ideal engines for a gas trimmer, given that no one wants to use a too heavy trimmer for an extended period. Two-cycle engines are lighter because they need fewer parts to build. They are also not as complex as 4-stroke engines.

On the other hand, 4-cycle engines are more complex and have more moving parts, which means more things that can break. When it comes to servicing costs, therefore, 4-cycle engines tend to cost more and this makes both 4- and 2-cycle engines nearly equal in maintenance issues.

Your final decision between these 2 types of gas trimmers will depend on which one offers the best features for your needs. Following is a quick overview of these different features between 2-stroke and 4-stroke gas trimmer engines.

As you can see, 2-cycle and 4-cycle gas trimmers are not all that different from each another. They are both gas-powered machines which deliver plenty of power for your trimming needs.

If you need the power but not much of the noise. If you want a good quality and affordable trimmer, or if you are simply concerned about environmental pollution, or any other features. With the feature comparisons above, you can make the right choice.

Automatic vs. Bump Feed Trimmer: Which is Better for You?